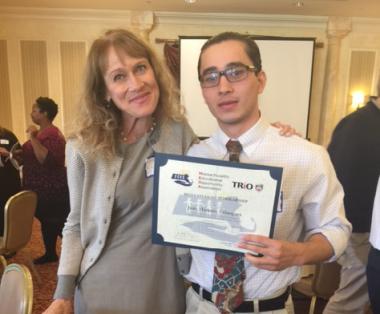 Congratulations to Juan Mederos Velasquez of South High Community School in Worcester! Juan was recently named one of five winners of a Massachusetts Educational Opportunity Association scholarship. An immigrant from Guatemala, Juan is a member of Educational Talent Search at his school with hopes of becoming a DEA officer after graduating from college.

His interest the Drug Enforcement Administration began as a child as he watched what government corruption and drug trafficking did to his homeland. After enduring a childhood of poverty, neglect and child labor, he made a harrowing escape through the deserts of Mexico to the U.S. at age 16. His luck began to change when he was captured by U.S. Marshalls and sent to a Detention Center.

With the help of Lutheran Social Services and the Department of Child and Family Services, Juan came to a foster family in Worcester and began school. Adjusting to American ways has not been easy, and his first adjustment was learning to read, write and speak in English. That perseverance and hard work is paying off. With the guidance of MassEdCO's Educational Talent Search program, he is taking advanced placement and honors classes as well as a college-level course in preparation for higher education.

Realizing how fortunate he has been and wanting to give back to the community, Juan has volunteered by serving meals to the homeless through his church and helping five days a week at a summer program that cares for 50 children each day. He looks on those experiences as learning opportunities.

Juan Mederos Velaszquez is well on his way to reaching his goal of becoming a police officer!

(Juan was nominated for the MEOA scholarship by his former ETS advisor, Elizabethe Plante.)